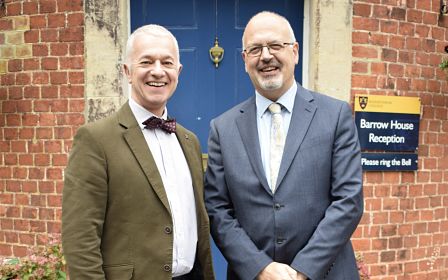 Our Principal, Stuart Nicholson, has decided that after fifteen years of Headship it is time to move on to other areas of education and to develop other projects in which he is involved.  Stuart advised us earlier this year that he wished to step down at Christmas and since then, he has been working with the Senior Management Team in selecting and appointing his successor.  We are pleased that we can make that formal announcement today, 19 November 2021.

We have benefitted greatly from Stuart’s experience during the tumult of COVID, which has been almost the entire time he has been at Bishopstrow.  Prior to joining the College, Stuart had been the Chair of the Independent Schools Association and Chair of the Council for Independent Education, as well as having had two previous headships in independent boarding schools.  However, it was his enthusiasm for technology in education that was to prove of particular value; when the College needed to switch to become a virtual school in March 2020, we were perhaps the only school in the UK with a Principal who had already set up an online school – Stuart had previously established live-online lessons from Cambridge offering IGCSEs and A Levels to students in the UK, and in Russia, Korea and Turkey.

The calm and reassuring approach that characterises his work with colleagues and students alike saw us through this enormous challenge, and we have been able to carry on supporting students with all the care that everyone admires at Bishopstrow, whatever COVID and lockdowns and quarantine regulations have thrown at us.  We are very grateful indeed for everything that Stuart has done leading Bishopstrow through these most difficult times.

Mario has 35 years’ experience of independent education, with a focus on international students.  His experience includes roles in boarding schools.  With a background in modern languages, from September 1986 to August 1997, Mario was Head of Spanish and Assistant Head of House at Woldingham School (one of Bishopstrow’s partner schools).  Then, from August 1997 to August 2007, he was Director of Studies and then Vice Principal of MPW in London.  Mario then moved to Cambridge Tutors College (CTC) in Croydon, initially as Vice Principal from 2007 to 2008 and then as Principal from 2008 to 2014.  From CTC, Mario progressed to Principal of CATS College in London, an almost entirely international college with 55+ nationalities represented.  After 5 years in this role, Mario was appointed Chief Operations Officer of Chancery Education Trust, a Multi Academy Trust consisting of three schools in South London.

With two children of his own currently going through IGCSE and A Level, and his background in languages and international education, Mario understands deeply the needs and concerns of international students and parents planning the next stage of education.  Stuart said to staff yesterday how much he was looking forward to introducing Mario to everyone and how pleased he was to be handing over Bishopstrow College to such a capable friend and colleague.

We would like to take this opportunity to thank Stuart for his myriad of contributions to Bishopstrow during his time with us and to wish him the very best with the next stage of his career.  We are very much looking forward to having Mario join us at Bishopstrow in January 2022.

Categories: News
Where NEXT?

We use cookies on our website to give you the most relevant experience by remembering your preferences and repeat visits. By clicking “ACCEPT ALL”, you consent to the use of ALL the cookies. However, you may visit "Cookie Settings" to provide a controlled consent.
Cookie SettingsReject AllAccept All
Manage consent

This website uses cookies to improve your experience while you navigate through the website. Out of these, the cookies that are categorized as necessary are stored on your browser as they are essential for the working of basic functionalities of the website. We also use third-party cookies that help us analyze and understand how you use this website. These cookies will be stored in your browser only with your consent. You also have the option to opt-out of these cookies. But opting out of some of these cookies may affect your browsing experience.
Necessary Always Enabled
Necessary cookies are absolutely essential for the website to function properly. These cookies ensure basic functionalities and security features of the website, anonymously.
Functional
Functional cookies help to perform certain functionalities like sharing the content of the website on social media platforms, collect feedbacks, and other third-party features.
Performance
Performance cookies are used to understand and analyze the key performance indexes of the website which helps in delivering a better user experience for the visitors.
Analytics
Analytical cookies are used to understand how visitors interact with the website. These cookies help provide information on metrics the number of visitors, bounce rate, traffic source, etc.
Advertisement
Advertisement cookies are used to provide visitors with relevant ads and marketing campaigns. These cookies track visitors across websites and collect information to provide customized ads.
Others
Other uncategorized cookies are those that are being analyzed and have not been classified into a category as yet.
SAVE & ACCEPT